The weather today has been mild and not rainy for many, especially in England, though low clouds and fog have settled for most of the day in the south (Figure1). This is due to the high pressure still positioned over the continent which causes light winds and foggy conditions in the lower areas. In Scotland and Northern Ireland instead, more clouds and some showers have occurred during the day, though with still mild conditions due to the Tropical air mass coming from the south. 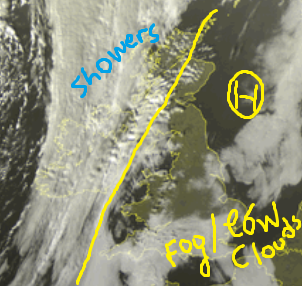 Regarding the weather for Friday, still mild and bright conditions are expected mostly everywhere (Figure2).

During the night possible showers are expected on Western Scotland and Northern England, though localized, instead bright conditions elsewhere, though with some fog and low clouds on southern England and Wales.

In the morning sunny on the east of England, some low clouds and fog on the west and in Wales. Overcast conditions in Scotland and Norther Ireland. During the afternoon, few showers are expected in Scotland, still localized, instead bright conditions elsewhere, but with still possible fog and low clouds in Wales and Central England. During the evening, brighter skies in Scotland, and some clouds between Wales and England.

The winds will be light, from the south, though they will start turning south-easterly during the evening (this will cause a slight decrease in temperature on the east of England).

I am Edoardo and I am passionate about weather analysis and forecasing. I would like to share my knowledge and to learn more with others (both International and Italian community). View all posts by edof93